Skirmish is a tactical wargame depicting combat encounters between two small armies, battling either for objectives or for annihilation. Unlike similar wargames, however, Skirmish does not use miniatures or measurements, and is played entirely with dice and an eight-by-eight square grid. The aim is a wargame with a low barrier to entry that’s accessible on a tight budget, with simple base rules but plenty of space to build on.

The Skirmish core rulebook features the Tamerlane Wars. Taking place on war-torn Tourlian, the industrialised war machine of the Mordaunt Empire clashes endlessly with the loosely aligned states of the Ventrasse Alliance. Though the endless Tamerlane Wars have now become the norm for the people of Tourlian, very few know that the war itself is the result of an coup d'état by the Mordaunt prince-regent Beauregard - a means to both consolidate his power and stamp out the sorcerous traditions of Witch-Queen Ventrasse. 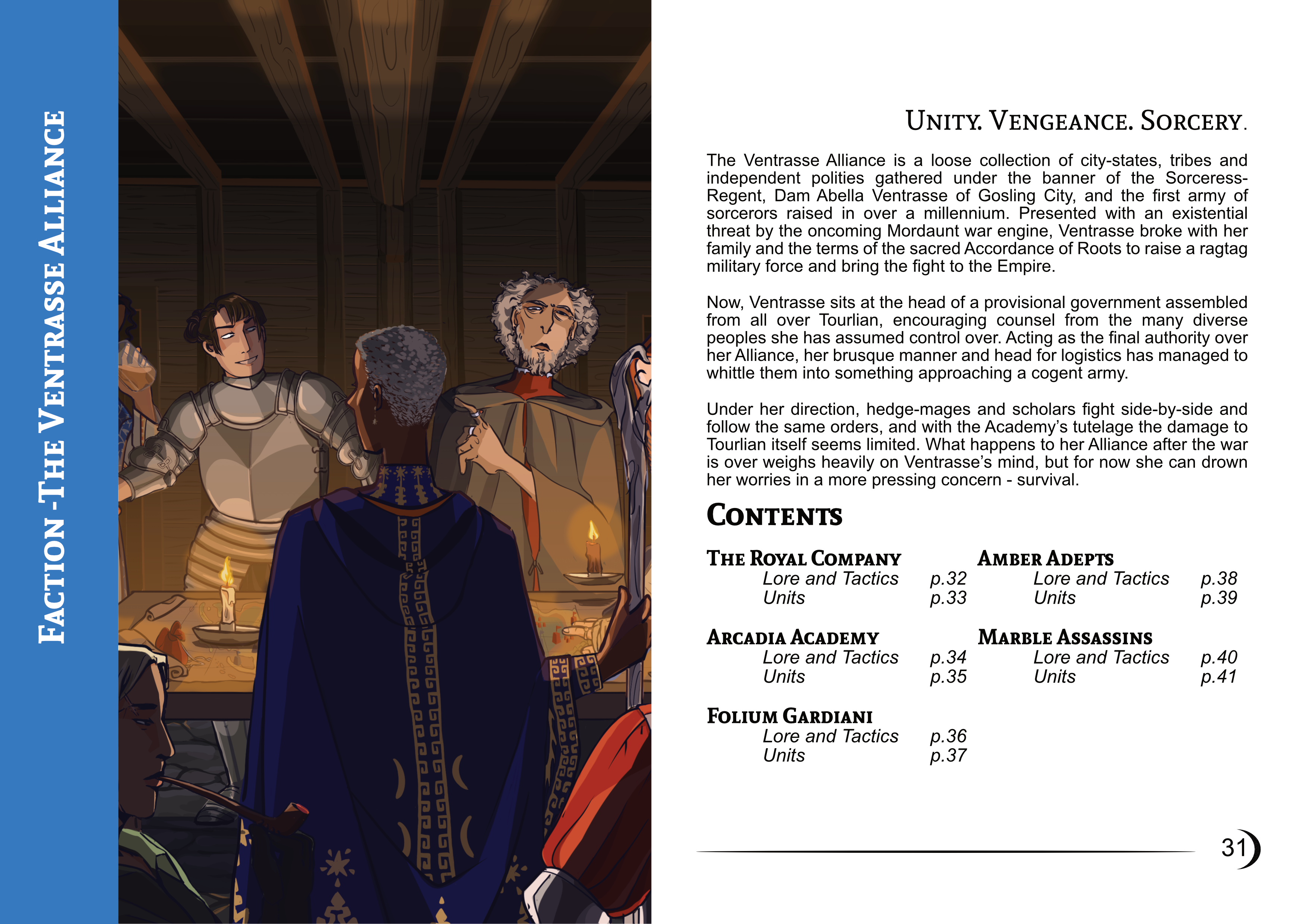 A spread from the rulebook, introducing the Ventrasse Alliance

The Aggro Crab Seal of Quality

With thanks to the kind support of our 235 Kickstarter backers, Skirmish was funded. If you backed the project but didn't receive an email with your code for the game, send a DM on Twitter to @BiscuitFundTTG, or through Kickstarter message.

In order to download this wargame you must purchase it at or above the minimum price of $10 USD. You will get access to the following files:

Support this wargame at or above a special price point to receive something exclusive.

Get a free download of Skirmish! No strings attached; if you can't afford a copy right now, then please feel free. Extra copies will be added periodically.

Want to play a miniature war game like Warhammer but don't have the money to buy minis or the patience to paint them? Skirmish has got you covered! Moreover, there's some fantastic writing on the lore of the armies.

I’ve never played a wargame before and have no miniatures, so this looks a great place to start! Dice and an 8x8, I can manage.

I’m not sure about how to practically manage some of the details, though.

How do you usually mark Full vs Half Cover on the board? What’s a good way to track its remaining hits?

What about long-term effects like the Lightfortress Arbalest’s damage counter?

And should the Hertzward Company have an Army Action to Regenerate damage to an undestroyed armor d4 at the end of the turn? (Regenerating is mentioned in tactics, but I don’t see it operationalized anywhere.)

Is there any way to print the pdf off as a booklet? With how the current pdf is structured printing it as a booklet is impossible.

We'll have a look to see if we can upload individual pages in addition to spreads, but we encourage you to check out https://biscuitfundgames.com/ where you can get a physical copy!

You can split it up into 1-up pages using Briss, then repaginate for printing using the LaTeX pdfpages package. I sewed it into a Coptic-bound book with the help of the Signature Optimizer (which wrote the LaTeX file for me).

Hey. i recently got the game and was wondering if you could put forward some guidelines or rules for building custom armies as far as giving them abilites and stats?

Hello, bought the bundle for Ukraine and found this game.
It's really fun, but I have multiple rules related question, where should I ask them ? Thank you.

Ask them here, friend! Probably useful to have any clarifications I can give on the game page anyway!

I don't know why but the message disappeared, so I put it again

how does attack hitting each enemy unit within a zone work with multiple units in the same space like Feral Army's Wasp or Honnywood's Dusthorse. on the latter does the rider and the mount take each the damages, are the damage inflicted to the rider directed to the horse (resulting in double damages on it) or does the Horse only take the damages once.

Same for wasp, does they all take damage (and die) or they only take the damage once ?

Does every Hardpoints have to be on the map so the Ovatten can't be on the border while it have his hardpoints ? Also, if he want to pass through a gap of only 1 square and there is cover blocking, can he pass through, or the hardpoint block him from doing so

The action Spell of Forgetting of the student talk about “Remove all keywords and modifiers”, but I've not seen this word in the pdf, so what are they referencing ?

If I understand it correctly, if you have 4 lantern in a square formation, the top left and bottom right can both use Consuming passion with using the two other because, the first say they can't act, but, they also didn't act, so they can still count for the second using 'Consuming passion” ?

7. The Myrmidon guild : Flower of Battle

The buzzard of the feral army talk about “if used on slime” implying you can attack your own allies, does it allow a Myrmidon Player to attack its own Flower of Battle to trigger "No other champions" and increase its damage.

8. Creating cover and modifying it

Does the limitation of placement for cover at the start still applied for action of unit like the Druid of the folium “geomancy”. Also, does the half cover health is healed when when transformed into full cover or keep the damage done (using the same “geomancy” for exemple)

9. Does Resist and Vulnerable is culumable with itself

If two recruit of the mordaunt 1st regiment use tripping strike on the same enemy, does he have 1 or 2 vulnerable ?

Same for Flag-bearer of honywood battalion “reveille!”, if two use on the same ally, does he have 1 or 2 resist.

10. Follower of the Untruth : Prophet of Untruth

When the enemy commander only have one unit left, if “the first lie” is use on it, does he lose at it's turn ?

Also, if the enemy commander is using the machinist core, the first lie could be chained every turn and just making the only unit disappear

If I understand correctly the “Molotov” action, if someone has climb and on a cover, if the ghast use the molotov on the cover, it don't hit the the unit on the cover (Is it what should happen ?)

Do you think that you will make a video game version for playing alone against a AI or play online with other user ?

Thanks for all of those questions! Some of these are good catches based on proofreading errors we made in the text – late-game Skirmish went through a lot of rewrites, so we’re very thankful for the help in getting the final text updated.

1) Yes, as written this does allow you to move things infinitely. Good catch – the Field Officer should only be able to use its Weathered Blade ability through the effect of Opportunist. We’ll add this to the update log.

3) Yes, all of the Hardpoints need to be on the map, so you cannot deploy an Ovatten with four complete hardpoints on the very back row of your deployment zone as the rear hardpoint will need space to be deployed. Hardpoints are considered part of the unit and so will block movement, so if there’s a one-space gap in cover then the Ovatten will be unable to move through it without destroying the cover first. It’s a big machine! Incidentally, this is why the Bunker Breaker attack on the Heavy Caliver instantly destroys cover.

4) Another editing thing we missed in the last stages of the book – originally the terms defined in the Glossary section were divided into Unit Characteristics, Actions and Keywords, but as the only two Keywords we had were Vulnerable and Resist we ended up folding that into the general action glossary. We missed that while we were changing everything else to match!

5) No, as being used to power an adjacent Lantern’s attack counts as taking an action. Let’s say that we have four Lanterns in a square formation as follows:

6) Multiple uses of Slink Away do not stack, so you will only block the next instance of damage and move up to 2.

8) The rules for the limitation of five connected pieces of cover are constantly active, not just during setup, so you would be unable to use Geomancy to block off the battlefield without clever positioning. Damage is not healed when Geomancy is used to increase cover size, so a piece of half cover with one “health” left will still be destroyed in one hit from anything if it becomes full cover through Geomancy.

9) Yes. Multiple sources of Resist and Vulnerable stack, so if you used two Reveille! on a unit it would have Resist 2 for a turn.

10) Yes. As they have no units left to command, the player will be considered Tabled and will lose the game. With regards to the matchup between Machinist Core and the Followers of Untruth, it’s a bit of an uphill battle if you only have one Ovatten, but in our testing we’ve seen the matchup isn’t quite as one-sided: the Ovatten will be able to consistently outrange the Prophet and destroy it without much difficulty due to its lack of Resist.

11) It should hit the unit on the cover. Another editing catch – the Molotov’s second ability should state “deal 4 damage to all units within or adjacent to that Cover.”

We were attempting to get a Tabletop Simulator client running, but encountered some issues getting things working and the dev we were working with has had to drop the project due to time commitments. In the meantime, to play Skirmish remotely pretty much any client that can create dice and a grid – like TTS – can be used as a stopgap. We don’t currently have any plans, or honestly the ability, to make an AI to play the game, but perhaps that’s something we’ll look into if we restart client development!

Hi! Lovely game. I have a request. When you look at doing any future updates, could you look at adding a cell margin to all the tables? It's quite difficult to read and reference with out one.

Thanks for the feedback - we're aware the tables are a little cramped right now, and now that we've got the paper release and know it's readable in print, we're satisifed we can make the text smaller and add margins to the tables if we go ahead with another print run.  We'll add it to the to-do list of updates we've got going!

Congratulations on the launch!!! Do people who ordered a physical copy via backerkit after the kickstarter wrapped up qualify for a pdf copy as well?

By the way we did the Kickstarter the answer is unfortunately not, but we will be releasing a rules only version without any of the armies soon so you can get a look at the rules while you wait! 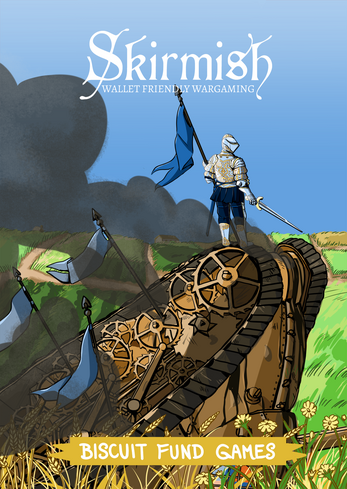 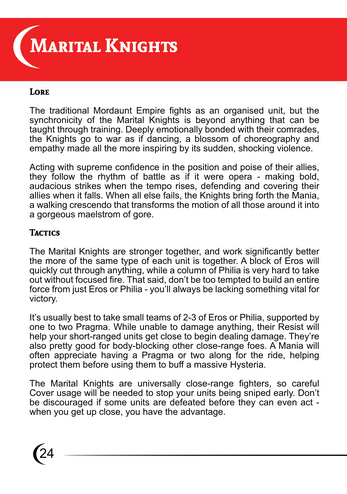 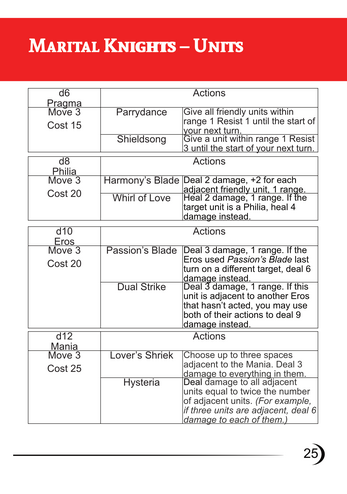 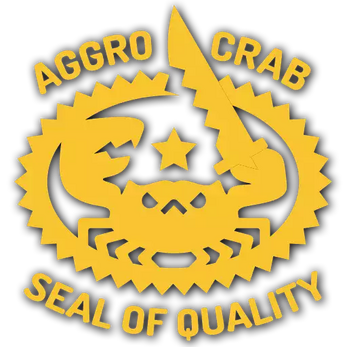