In the blighted heartland of this country, where the mountains shiver with mystery and the marshlands boil with snakes, lies the only hope you have for escape. With an indefatigable Pursuit behind you and the grim snow line ahead, many bitter trials await as you cross the Bittercold!

A Hunt through the Bittercold is a two-player asymmetric tabletop roleplaying game, where two players use a deck of playing cards to procedurally generate trials, battles and events on a lone traveller's journey to whatever lies on the other side. Inspired by roguelike card battlers like Inscryption, Slay the Spire and Nowhere Prophet, the Hunt will take you on a winding journey through a grim, cold place at the heart of a strange, nightmarish world.

Made in the Fight Card system designed by The Dice at Rat Wave Game House, players in the Hunt take one of two roles - the wily Protagonist, who must manage their resources, fatigue and determination to make it to safety, and the inscrutable Bittercold, who describes the setting, plays the role of the strange locals, and tries to crush the Protagonist in brutal combat.

As the Hunt wears on, the Protagonist will permanently lose cards from their deck as they are injured, eat provisions and pay for services. Keeping your stamina up with frequent rests and acquiring items is essential. But don't tarry too long, as the bloodthirsty Pursuit soon picks up the Protagonist's trail, and will swiftly put an end to them unless they keep moving forward through the Bittercold.

A Hunt through the Bittercold is a gripping narrative roguelike experience, where both players have a chance to contribute to and flesh out the story. Whether the Protagonist succeeds or fails, each Hunt will be a grim yet viscerally satisfying adventure that you'll remember in the dark days to come.

In order to download this game you must purchase it at or above the minimum price of $10 USD. You will get access to the following files: 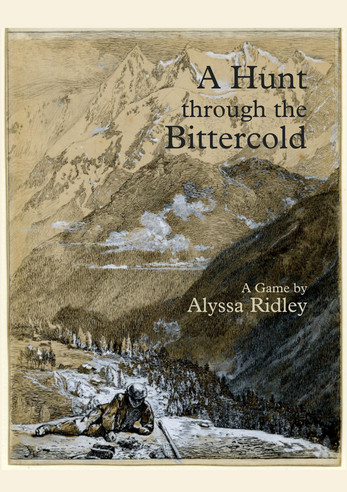